The UK radar system was rapidly run down towards the end of the Second World War. It was then envisaged that it would be at least another ten years before another major conflict, but the first Soviet nuclear test in 1949, and the outbreak of the Korean war one year later, dramatically changed that view.

The then perceived threat was on onslaught of Soviet Tu-4 bombers (exact copies of US B-29 Superfortress, obtained when four crash-landed in 1945 in Siberia after a bombing raid on Japan) armed with 20 kT yield atomic bombs. It was doubtful that with the decayed state of the UK’s air defences that they could have been detected and intercepted. With great haste, the Cherry report of 1949 recommended an urgent overhaul and improvement of the UK’s air defences, under the codename Rotor. Due to this, it was recommended that the sprawling network of some 170 radar sites left over from the last war be rationalised and consolidated to 66 sites, and that the best existing radar be completely re-built to higher peacetime standards. The essential elements of the wartime Control and Reporting structure were maintained - a hierarchical command and control system, separate sectors etc. The contract was given to the Marconi Wireless and Telegraph Company and was (and still is) the largest government contract awarded to a UK firm.

The project was massive. The re-manufactured radar equipment consumed valuable manpower and resources. It must be remembered that the country was under dire economic circumstances at this time, with rationing still in place for many items. But this effort resulted in massive improvements in reliability and maintainability, as well as performance: some equipment had its range more than doubled.

Research commenced on a new Centimetric Early Warning (CEW) radar, code named Green Garlic, later known as Type 80, as a replacement for the Chain Home / Ground Controlled Intercept radars. But for the meantime the primary long range warning came from 28 selected rebuilt coastal Chain Home sites. 38 other sites were chosen for a variety of roles: Chain Home Extra Low (CHEL), CEW and GCI, using standardised sets of equipment: either the Type 7 or 11 GCI sets or the Type 13 and 14 centimetric sets.

The Rotor project was divided into two areas, east coast and west coast, partly as an economy measure. The threat was seen as higher on the east coast, so the majority of the sites had underground protected operations rooms. The west coast had mainly surface bunkers or semi-sunk ones. The distinctive feature of the east coast sites was the bungalow, which served as access/guardroom to the bunkers. The bungalow concealed an access corridor, which led to a one-, two- or three-level bunker. 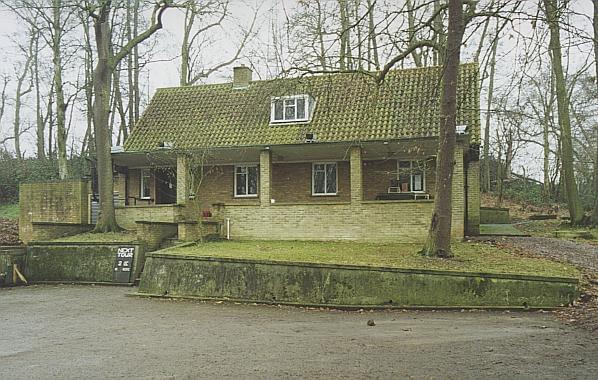 These bunkers were known as R1 for single level bunkers, R2, R3 and the SOC - R4. In construction, a massive hole was first dug and usually extensive de-watering had to take place. The bunker was then constructed and buried under earth. The bunker had 10-foot thick ferro-concrete walls, complete with its own borehole, generators and filtered air conditioning. They were supposed to give protection against a near miss by a 20 kT nuclear weapon. The west coast sites had similarly massive bunkers, but built on the surface.

At the top of the Rotor hierarchy, four huge R4 SOCs were also built to provide command and control of the defences. Fighter Command split the UK into six sectors:

In addition the radar-laid AA guns of the Army got 28 protected Anti-Aircraft Operations Rooms (AAORs) in target areas. The whole Rotor programme consumed 350,000 tons of concrete, 20,000 tons of steel and thousands of miles of telephone and telex connections. The project progressed with the usual delays and hiccups.

The arrival of the Type 80 in early 1953 changed the whole concept of Rotor. It was realised that it could provide CEW and GCI functions at one installation. It was also found that on exercises, it was far easier to control the interceptors from the radar site itself. There was simply too long a delay in the transfer of data in the original Rotor concept.

With the Soviet H-bomb in 1955 and the advent of supersonic, high-flying bombers, every second saved in warning and control was vital. A system designed to counter a 400 mph piston-engined bomber just could not cope with the new threat. The system of Master Radar Stations (MRS) was conceived.

With the Type 80, warning and control could both be handled at the same site with the same radar. The superior range of this radar meant that fewer sites were needed. Although many Rotor sites became Master Radar Stations, many more became redundant, including the SOCs and the AAORs. The surplus sites, some less than two years old, were cleared and transferred to other government departments as war HQs.

Today many Rotor sites remain, some having gone through several different owners and uses, and varying from intact (Kelvedon Hatch, Anstruther) to derelict (Beachy Head).

To an explorer the main giveaway is the very distinctive bungalow (mainly found on the east coast sites), which stands over the entrance to the underground bunker complex. The design of this bungalow has features common to many GPO telephone exchanges of the time. One cannot but wonder if they came from the same Ministry of Works drawing office. The circular fanlights and verandas make for a very attractive building.

Some of the west coast sites are completely cleared, with only a few acres of rubble to show what was there. With the rapid post Cold War dismantling and the disposal of the Emergency Control Network, many of these once very secret places are now on the market. Let’s hope many of them survive.

Warning: many of the Rotor bunkers are in a very dilapidated and dangerous state: flooded, with missing floors, and full of asbestos and broken glass, and are very dangerous places to explore. Do not explore without permission of the owner and/or alone.